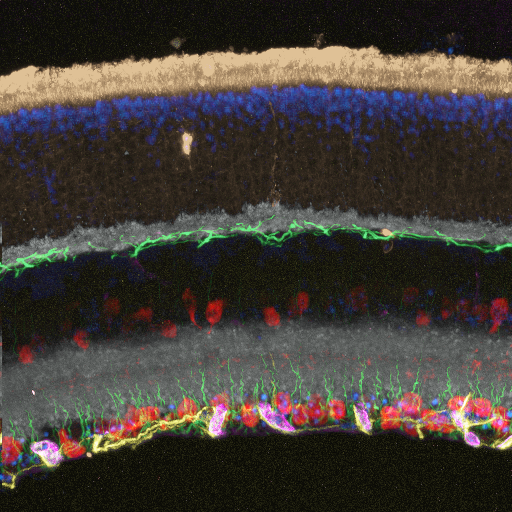 Tools for surveying brain cell types and circuits must be scalable, both in the number of molecular targets visualizable at once, and in the size of the tissues that can be assessed. They also must be high resolution, since cellular compartments such as axons, dendrites, and synapses exhibit nanoscale feature sizes. Despite rapid progress by many teams in multiplexed imaging of expressed RNAs in intact brain circuits, or "spatial transcriptomics", technologies for multiplexed imaging of proteins in intact brain circuits lag behind, despite the fact that knowing the precise identity and location of proteins in defined synaptic, axonal, dendritic, and subcellular compartments is one of the keys to understanding neural function, and thus deriving cell types for a systematic census. Furthermore, given that many proteins are located in specific nanoscale compartments of neurons, and many attain their full functionality only in the context of densely packed nanoscale complexes of many proteins, the need for nanoscale mapping is even more acutely felt for proteins than for RNAs. The Boyden and Yin labs propose to address these limitations by creating a full toolbox for the multiplexed imaging of at least 30, and ideally 50, proteins at once, by optimizing the use of DNA-barcoded antibodies for rapid serial imaging of many different neural proteins (aka Immuno-SABER, developed by the group of PI Peng Yin), in the context of expansion microscopy, a radical new method for nanoimaging that utilizes physical expansion of the sample (Developed by the group of PI Ed Boyden). They will also develop, for the purposes of Immuno-SABER multiplexed antibody imaging, a new form of expansion microscopy that decrowds proteins from one another, for better access by antibodies. Finally, they will integrate the nanoscale, highly multiplexed, spatial proteomics methods described above with spatial transcriptomics. They will integrate in situ sequencing of expanded specimens, an existing project of the Boyden lab, with the Immuno-SABER protocol. In this way they will be able to simultaneously survey proteomic and transcriptomic information, throughout neural architectures, with nanoscale precision. Importantly, they are focusing from the beginning on the questions of scale and accuracy, key to the success of the BICCN. They aim to deliver to the neuroscience community not just a toolbox that is easy to use, but very powerful.